A Way In The Valley 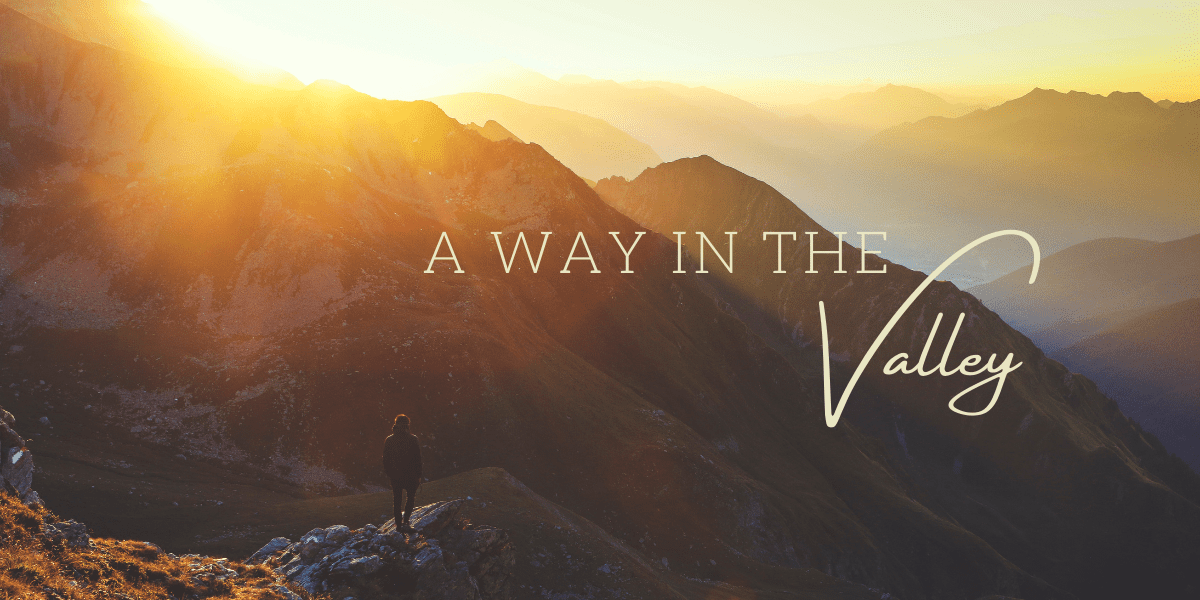 Someone recently asked me, “How are you so on fire for the Lord? You’re so excited about Scripture.” I nearly laughed, even as I was incredibly humbled by this statement.

You see, last year, I was anything but on fire for the Lord. I was walking through a deep valley—one of disgruntled frustration and anguish. It was a spiritual battle that I had a hard time explaining to anyone around me. Were there tears? Yes. Were there friends to help? Yes, and I am so grateful for those who helped.

But was God present in that valley?

YES. And more than I realized at that time.

Now, on the other side of the battle, the Lord has brought me into a place of fire and excitement. No longer do I have to force myself to read the Word. And time in prayer with Him waters my soul.

Surrender—that’s what changed. I had to surrender that my life was not about me, not about what I wanted and that His will be done. It was a lesson that was beyond humbling, it took forgiving someone who I thought I had forgiven but still held a deep-rooted hurt. It took looking into the mirror and really seeing how much I needed Christ, how ragged my soul was.

It took walking to the cross in prayer and surrendering all at His feet.

You see, there on the cross the Lord paid for all of our sins. We just celebrated Easter yesterday, but did you celebrate in your heart for what He did? Did you grasp the work done on the cross? There He was, arms outstretched, body beaten and broken, and He breathed His last for you and for me. He did this that we might dwell with Him, be with Him and celebrate in the wonder of who He is.

All that He would do on the cross was long foretold—His coming proclaimed all the way back in Genesis 3 after the Fall of man in the Garden of Eden. From the very beginning the Lord was making a way for us. He walked before us in the valley of death that we might be able to dwell with Him in glory.

Are you currently walking in a valley? Well, can I take a moment to tell you something fascinating?

But what I want to point out to you is the significance of this valley. It was considered a valley of death because the poor were buried there, and throughout Scripture when things needed to be cleansed the ashes and blood were sent to the valley.

Now, turn with me to John 18:1 and lets see what it says. Here we find Jesus leaving the Passover meal, on the night He was betrayed, and He is walking toward the Garden of Gethsemane.

When Jesus had spoken these words, he went out with his disciples across the book Kidron, where they was a garden, which he and his disciples entered. – John 18:1

Right there. Does that not get you excited?

You see, Christ walked through the valley of death on His way to the garden where He would plead for the cup of suffering to pass from Him, but not His will, but the Lord’s be done. And in that garden, Jesus commands His disciples to pray and keep watch. And then we know what happens, He is a betrayed, arrested, and abandoned before being led back through the valley to Jerusalem. There He would face trial, although innocent, and would then hang on a cross for you, and for me, for the payment of our sins.

Christ surrendered and walked through the valley of death for me—and that is a place I can draw strength from. Whether you are walking in grief or fear, walking in a season of dryness or anguish, the Lord has walked that road before you.

The Lord is my shepherd; I shall not want.
2     He makes me lie down in green pastures.
He leads me beside still waters.
3     He restores my soul.
He leads me in paths of righteousness
for his name’s sake.

4 Even though I walk through the valley of the shadow of death,
I will fear no evil,
for you are with me;
your rod and your staff,
they comfort me.

5 You prepare a table before me
in the presence of my enemies;
you anoint my head with oil;
my cup overflows.
6 Surely goodness and mercy shall follow me
all the days of my life,
and I shall dwell in the house of the Lord
forever. – Psalm 23

So you wonder how it is that I am on fire? How anyone is on fire for the Lord? It’s a surrender to what He has done, and awe and wonder for His work on the cross. He defeated death that I might live.

Only by His going before me in the valley of death, have I been made new and brought to life. And that is something that will make me fall at His feet in wonder. I hope that today you take a moment to surrender, to praise Him, and thank Him for His mighty work and the hope He ignites in our hearts.

For to Him be all the glory, each and every day.