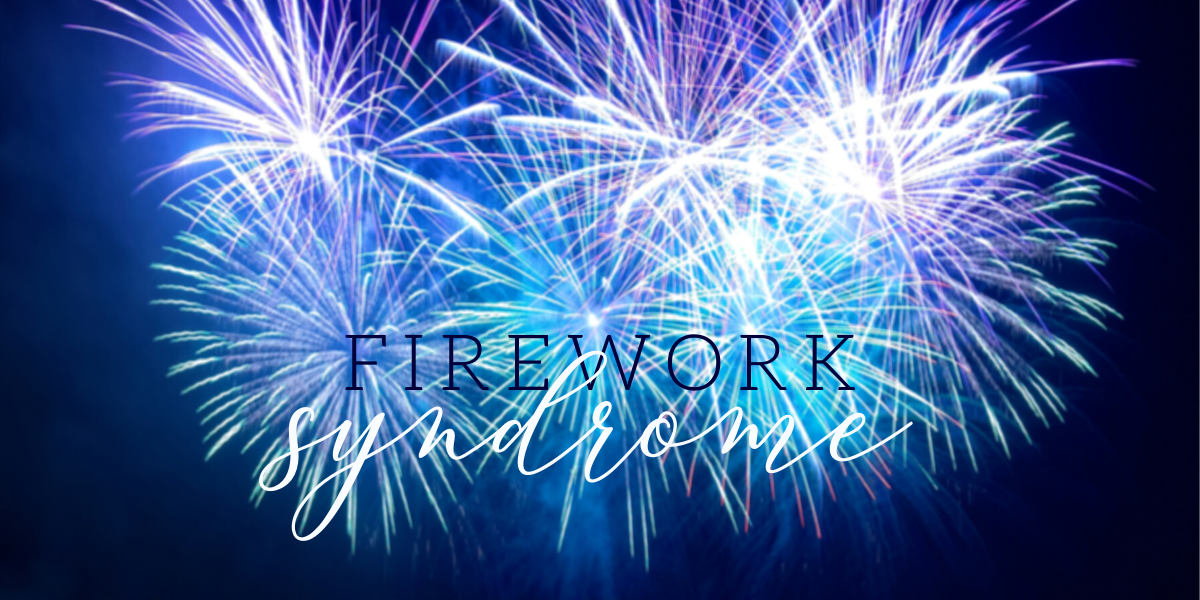 A little over a year ago, my husband and I adopted our second dog, Nala. The shelter told us that she was half Bird Dog, half German Shepard and would grow up to be about as large and strong as our yellow lab. A year later and we’re left with the same sweet dog with floppy ears, a 30-pound body and a fear of fireworks that would make a grown man cry.

Thanks to the delightful hobby of our neighbor two doors down, the last few weeks have started with a pop of fear with a firework set off in broad daylight. Poor Nala, resting easy, begins what you would believe to be a full on seizure and her eyes look like that of dog in an old cartoon. She looks to us thinking we may be the ones hiding the next bang. She’s terrified. Unbeknownst to her, it will probably only be one or two fireworks, but her single experience leaves her sitting on the edge for the remainder of the night and sometimes into morning. Every night, we repeat this process. Every time, she’s a little more shaken than the night before.

Consider King David in 1 Samuel and 2 Samuel, although David was “a man after God’s own heart”(1 Samuel 13:14) he still endured endless trials and tribulations. Lasting jealousy of his reign, the uprising and rebellion of his people (and enemies), the death of a child, the temptation and ultimately a fall into adultery. I mean truly it is the original daytime drama. It’s being ‘Team David’ and watching as God uses a multitude of fireworks in his life to strengthen his faith rather than shake him (1 Samuel 13- 2 Samuel 24).

Ultimately, this life resulted in many familiar words in the Book of Psalms, but there is one that stands out to me – Psalm 62, specifically an area that speaks of waiting and trusting.

For God alone, O my soul, wait in silence, for my hope is from him. He only is my rock and salvation, my fortress; I shall not be shaken. On God rests my salvation and my glory; my mighty rock, my refuge is God. Psalm 62:5-7

David was waiting in the posture of trust. Although he ultimately knew that another struggle would be right around the bend, he placed his trust in God alone – not man.

There have been a lot of nights of unwelcome fireworks in my life. I’m sure you could say the same, friend. Nights where you felt calm, but your soul forgot who to trust and you ultimately were left shaking.

After a series of struggles from this past year, I felt my soul coming to peace, but I would stop myself from feeling that peace. My husband could sense my anxiety and after much hesitation, I muttered that I felt like I was waiting for the next bad thing with tensed shoulders and a restless heart. I didn’t want to get too comfortable, because then I wouldn’t be in control of what came next…but that’s the thing. I am not in control. No matter how high my shoulders may rise, I am still not the mover and maker of all things.

The real truth is, I’m a daughter of the most high King. I have no power over the next valley or the next mountain, but I know Who does.

Psalm 62:11 goes on to say, “Once God has spoken: twice I have heard this: that power belongs to God.”

All of it. Not a single ounce is in my hand. Thank you, Jesus. Amen.

God did not give up His son who endured countless trials for my sin so that I may walk around with white knuckles waiting for the next set of fireworks. He did it so that my soul may have rest in His plan and that when the fireworks come, I’ll remember where my hope resides.

Heavenly Father,  I am shaken from the fireworks that have worked their way into my sky, but I know it’s according to Your plan. All that You ask of me is to trust in the process and Your purpose. Help me loosen my shoulders and look up for Your guidance when I feel my soul becoming weary. May my refuge, my very hiding place, be in You and not man or my own desires. Help me to let go of the shaking and stand firm in who You are. Thank You for Your son that bled for my sins. That bled and died so that I may have freedom. Help me to never take that for granted and to have a burning desire to share it with others. You are good. You are in control. Amen.