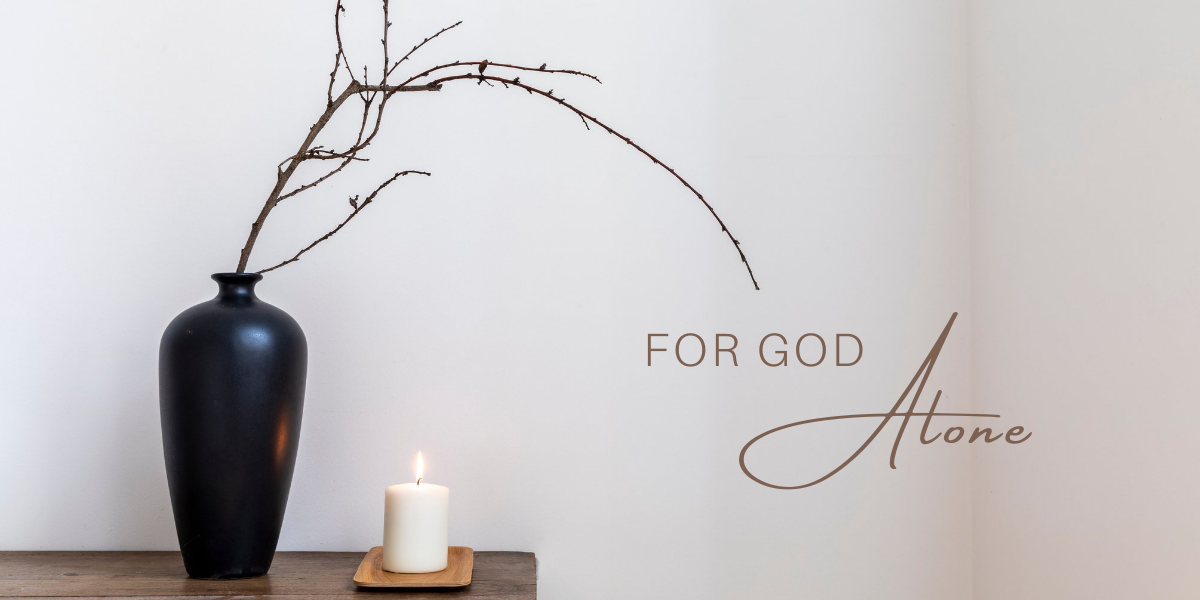 There is a scribbled note written in the margins of my Bible that reminded me of a powerful message. There in my haphazard handwriting, truly illegible to anyone but me, were the words “Sin begins and ends in the garden.”

I remember coming to that realization a few years ago as I was reading through Christ’s walk to the cross. I had thought about Eden and where sin all began and then Gethsemane where the Lord walked to the cross. He fought a battle far different than the one those closest to Him thought He would fight. Peter was ready to fight with a sword, but Christ fought by laying all of Himself down.

And that is the point of this blog today, laying it all down for the sake of the Lord.

There is a particular word that has been running through my mind for the past few months. It’s a word that has come up in conversation repeatedly. One simple, but very powerful word.

Turn with me to Matthew 26. You can read the entire chapter HERE if you wish, but we are going to graze over some passages to land on a few key verses.

What we see here is the Last Supper. Can you picture it? All the disciples hanging on Christ’s every word. Can you imagine the glow of the light, the burning in their hearts as He spoke? Traditions were held as the Passover meal was distributed and their bellies were full. You know that feeling, right? That “after-Thanksgiving-meal-food-coma”? All of this leads to a conversation between Peter and the Lord. Jesus foretells what is to come and Peter denies it. He says he will never disown the Lord.

Peter answered him, “Though they all fall away because of you, I will never fall away.” – Matthew 26:33

It’s such a bold statement, and isn’t it one we can all easily make when there are no trials before us? Can’t we say these things when we are “in the moment,” when we feel close to the Lord?

But then…they enter the Garden of Gethsemane, and everything changes. What Peter had assumed would be the way was shattered. He hadn’t truly heard Christ; he hadn’t truly listened to what Christ meant when He said He would come into His kingdom.

You see, I love how human Peter is. He was ready and prepared to fight for the Lord. When the Roman soldiers arrived to arrest Jesus, he whipped out his sword and fought.

But he was fighting the wrong battle. He misunderstood what Christ meant when He told His disciples what was coming. Peter was thinking it was a battle to be fought for on the front lines, or at least it seems that way, until in the garden he realizes Christ is going to fight a completely different battle—a battle Peter didn’t feel prepared to answer.

You can understand the whirlwind. The completely dismantle of reality. At one point Peter was in the Upper Room with Christ hearing these words of a new covenant, and then before he can even really comprehend what is happening, Christ is led away in the garden and he is accused of being a follower of Christ. And what does Peter do? He denies that he knows Christ. Not once. Not twice. But three times. (Matthew 26:69-75)

Do you see yourself in Peter? I do. Too often I am fighting the wrong battle. I want to charge in, chart my own course, claim that it is the Lord’s leading (or even confuse myself into thinking it is His will) and I end up in a place like Peter…outside the city weeping bitterly for I have taken the wrong course of action. (Matthew 26:75)

You see, Peter didn’t surrender to the plans of the Lord. He was too busy focusing on the glory of what was to come, but he didn’t realize the price. And therein lies that word again. SURRENDER.

Daily, and more recently, hour by hour, I have been called to surrender what I think is the way to go and to open up my hands, lay down my plans, and let them go. I’ve been fighting so hard to find purpose that I’ve forgotten the joy of simply being in the presence of the Lord. I have forgotten what it is to be near to Him, to rest in Him, and to surrender all to Him.

So now, I want to challenge you for today. What is it that you are holding onto so tightly that you’re afraid to let go of it? Is there something you can think of? How about plans for the future? Or could it be a sense of justice for a wrong that was committed? Is it possible you are holding onto expectations and hopes for a future that isn’t realistic? Are you coveting someone else’s stage of life?

Yikes, all of those hit home for me. But do you know what else hit me squarely in the heart this week? The restoration of hope when Jesus reinstates Peter (John 21:15-19). There in that moment, Peter is brought back into leadership for the church with a true understanding of the battle at hand. All visions of a glorious battle for Jerusalem were surrendered for the battle of the Kingdom of God that cannot be measured.

With that, I want to encourage you to dig deep today. Think and search if there is something stealing your joy, and if there is, hold it out to God with open hands. And there, in the silence, in the quiet stillness of prayer, surrender it. Let it go.

For God alone my soul waits in silence; from him comes my salvation. –Psalm 62:1

And just like that, in silent soul surrender, I truly believe you will find joy on the other side when you focus on Christ and Christ alone.

Restore to me the joy of your salvation, and uphold me with a willing spirit. – Psalm 51:12

It’s His battle and His will, all we have to do is surrender unto God alone.