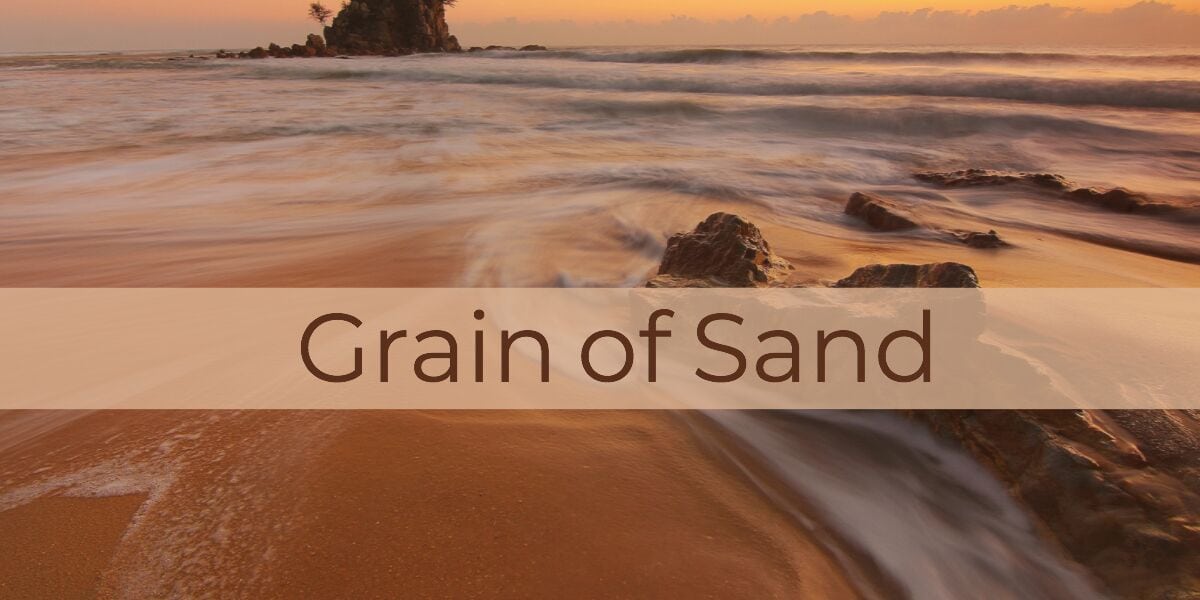 Is there anything quite as peaceful as standing at the ocean, watching the waves tumble upon the shore as the wind brushes and tugs at your hair?

You know that feeling. The sand crinkling beneath your toes, the salt sticking to your skin, the sun warming you from the inside out.

There in that place, I find it hardest to ignore God’s presence.

I’m not talking about the middle of the day when people are scattered all around, some in the water, some out. Music from a radio a ways off drifts along the shore and laughter and exultations can be heard. Certainly, God is there in those moments too, but I’m talking about the calmer times, those moments where you wonder if it was made just for you.

It was early one morning while on vacation and I was having trouble sleeping. Rather than toss and turn, I thought I might step outside and watch the sunrise. It was March, and as I held a cup of tea and huddled beneath a blanket, I grabbed my Bible to have a moment in the Word and watch His sunrise paint the sky.

My D-Group was working on memorizing the entirety of James 1 and as I began to recite those verses, I had to pause and watch the sharp strips of pink layered with golden sunshine rise along the horizon.

When in the midst of a great trial, my friend Stasia set her focus upon James 1:2-3. If you know Stasia, then you know how she spreads happiness wherever she goes. You would be hard-pressed to find anyone talking to her without a smile on their face, which I think is a reflection of her truly happy heart.

Some of you might know Stasia’s story, and Jacqueline spent some time describing a difficult moment in her life during the Press On event. You see, when you look at Stasia you see her cup is overflowing with happiness. You see a mother of three children, a wife, a daughter of the King, but what you don’t immediately know is that before God blessed her and her husband with their three children, they went through a miscarriage.

She says, “We went to the emergency room and basically waited for the ultrasound technician to come in since it was the middle of the night. This was an extremely difficult time between the tears, and the pain, and hanging onto our last twinge of hope that this was not happening. We had the ultrasound and the technician was not allowed to tell us anything while it was going on. We could see the baby like last time, but at the point when I think we were supposed to hear a heartbeat … nothing.”

Such expectation and hope were completely taken away at that moment. Stasia said she went through a process of trying to refrain from questioning God, but so many of them ran through her mind. “Why us? Why if the baby had such a strong heartbeat? Why is this baby no longer alive? Was there something I did?” But at the end of it all, there was simply God and the reality of the miscarriage.

Have you had a moment like that? One where you simply can’t understand why it would happen? It doesn’t seem right and yet it is the very situation you have to live through, breathe through, work through.

The questions come up. Why me? It seems so easy for others. And there is that bitterness when someone says something, a colloquial phrase that is supposed to make you feel better but really only makes you angry or cry.

I think Stasia had it right when she said, “We continue to go through up and downs. We continue to cling to the hope we have in Christ, making His name known and giving glory to Him.”

Through the trial, she and her husband continued to give glory to God even though they didn’t understand the reasons behind this miscarriage. Stasia proclaims that James 1:2-3 took on a whole new meaning as they walked through this trial.

Consider it pure joy my brothers and sister when you face trials of many kinds because you know that the testing of your faith produces perseverance. Let perseverance finish its work so that you may be mature and complete, not lacking anything. – James 1:2-3 (NIV)

Perseverance is defined as “continued effort to do or achieve something despite difficulties, failure, or opposition”. Maybe your trial isn’t losing a child, but what I am getting to is that it is a trial to you. It hurts, it’s painful, and it makes you wonder why it’s happening.

I wish I had an answer.

Have you ever had a friend come to you for comfort in the midst of pain or sorrow and you just wish you could give them an answer? That’s what I wish I could do right now.

But how about something better than a wish? How about a prayer? A prayer that we would make it through these trials and on the other side see what it is the Lord worked within us.

If there is one thing you can be certain of while reading the Bible it is God’s steadfastness and His love for His people. Jesus wept when He saw the pain of Mary and Martha at the loss of their brother, Lazarus. He could have kept that pain at bay and healed Lazarus before he died, but Christ said, “‘ Lazarus is dead, and for your sake, I am glad I was not there so that you may believe. But let us go to him.'” (John 11:14-15).

I hope God brings you an answer for this trial you’re walking through, or the one you remember so clearly but have passed through. It might not be now, it may be a ways down the road—but I pray there is an answer. I have found that the one trial I have constantly questioned in my life is now being revealed to me—thirteen years later.

Sometimes in the moment of struggle, we tend to only focus on the trial. Does it hurt? Yes, yes it does. But maybe we need to be a bit more like Stasia and look up.

When you’re standing on the beach and only focus on one grain of sand, you will miss the sunrise, the waves, the foam touching the seashore, the seagulls swooping through the air, the pods of dolphins dipping in the rolling waves, and the pelicans passing by. All of it is missed if all we can focus on is the grain of sand.

I’m not saying your problem is not huge or life-changing. What I’m saying is we serve a God who is bigger than all the problems, trials, pain and heartache in this world. He is with you in the struggle and for that, we can rejoice.

In Psalm 139 we learn that God’s thoughts about us are more than the grains of sand along the seashore. How big and great is our God!

My prayer is that this reminds you that you aren’t alone in this struggle. Or if you aren’t going through one now, you will remember His presence when trials come.

Like Stasia, you may be in a state of wondering why, and though those questions can be asked, it is better to remember who God is. He is constant.

Just because I’m sitting at my desk writing this to you doesn’t mean that waves aren’t still crashing along the shores of this world. I don’t have to be standing on the seashore to know the ocean still exists. Everything in life doesn’t have to be perfect to know God is still good.

He has a plan. Trust in Him, rejoice in Him, for His love for you is as everlasting as the waves of this world.

Consider it pure joy my brothers and sister when you face trials of many kinds because you know that the testing of your faith produces perseverance. Let perseverance finish its work so that you may be mature and complete, not lacking anything. –James 1:2-3 (NIV)