Home / WOW / Hospitality of a King

Hospitality of a King 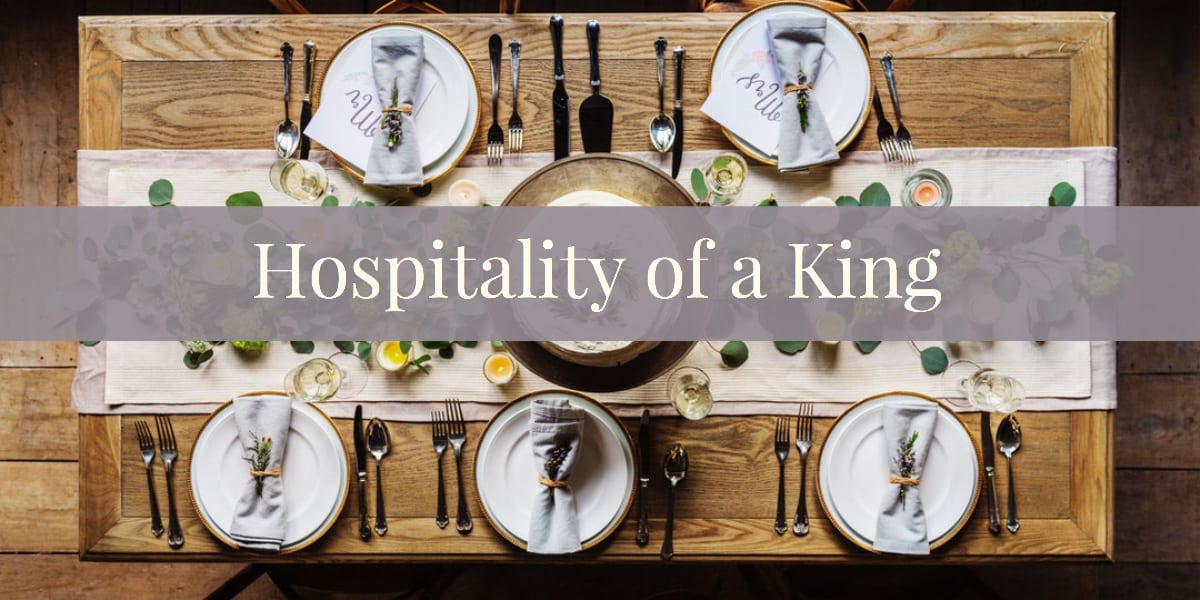 It began with God.  Everything good originated with God.

When God sent the flood to the world, He provided shelter for one man’s family.  When God asked Abraham to sacrifice his only son upon the altar, He provided the ram to take Isaac’s place.  When a father welcomed back his wayward son in the story of the prodigal son, he ran to him, arms open wide, and prepared a feast.  When Jesus ate with tax collectors and sinners and then provided a meal for His disciples, even the one that was about to betray Him, He extended this grace.

My favorite story of hospitality in the Bible comes in the Old Testament.  It is one I spoke on years ago and has stuck with me and helped me think through biblical hospitality.  King David had just taken the throne.  He was having a banquet.  (In those days, when a new king assumed the throne, it was custom to make sure there were no kin of the former king remaining.  Therefore, no competition or chance of betrayal.)  The new king asked to have any family of King Saul brought to the banquet.  He didn’t do this to kill them.  He did something crazy.  He asked for any remaining family of King Saul so that he could lavish God’s kindness on them.  He asked to show God’s kindness to them because of Jonathan (King Saul’s son and also David’s best friend) and his kindness to David while he was alive.

So a crippled man by the name of Mephibosheth was brought into the presence of the King.  I’m sure he was nervous thinking he was going to die very soon.  Instead, David did something foreign to him.  He asked Mephibosheth, Jonathan’s son, a crippled relative of the former king, to sit at his table… the King’s table… and not only that day, but every day for the rest of his reign.  Mephibosheth and all of his relatives would never fear but always be provided for.

I love how David provides for these remaining members of King Saul’s family.  He didn’t make them servants and give them merely bread and water.  He didn’t provide for their basic necessities alone.  The Bible says that Mephibosheth ate at the king’s table as one of the king’s sons.  He was invited into a place of honor and lavishness.  He was provided for in abundance.

And that isn’t the coolest thing about this story.  Mephibosheth was crippled in both feet, unable do anything for himself.  He wasn’t going to ruin David’s kingdom.  He wasn’t going to attack him.  He wasn’t even able to come to the table by himself.  But David, the man after God’s own lavish, hospitable heart, sought out this lame relative of a former king and sat him down at a place of honor in the palace.  He lavished goodness on one with no worth or ability.

Isn’t that what God does for us?

God could have chosen to condemn us because we sided with the enemy.  We are sinners.  We do not deserve His kindness.

He didn’t choose us to lavish His gracious hospitality on us because we were so good.  He delighted in us, welcomed us to sit at His table, in His presence, restoring a broken relationship, simply because He is God and He chose to love us.

Just like Mephibosheth, we are crippled.  We are lame.  We can’t even hobble up to the palace to get a meeting with God.  We have no worth because we are sinners.  We have no right to get a seat at the King’s table.  God is holy, entirely “other” than us.  He can’t sit at a table with sinners, yet He welcomes us.  He bids us come.  He makes ready for us a table.

So, how do we apply this beautiful truth to our lives?  In one way (we’ll talk about more next week), it means we offer hospitality to others… not just our friends and those who will bring delicious food.  We offer hospitality to those who may even be our enemies, those who have harmed us in some way.  Yes, this is difficult to do, but I do find that good food helps soften hearts (hopefully).

God is the writer of our stories.  And as a friend once told me, God writes beautiful stories.  Even though my story, and your story may have what we would consider ugly parts, it is a part of the beautiful story that God is weaving… a story that we’ll be able to look back on and see how marvelous His grace was to us.  We’ll be able to see His goodness in our failings.  We’ll be able to see His grace interweaved through every detail of our lives.  And we need to be welcoming to those who have messed up stories – just like ours.

When we fail to accept those with messed up stories, or crippled feet like Mephibosheth, we are not being like the lavish God that we serve.  We are only thinking of ourselves and our reputation.  Jesus made Himself of no reputation and died on a cross for our sins.  He died so that we could offer hospitality to other sinners… and so that one day we could sit around the table to the King with other redeemed sinners… all sharing one lavish meal and singing praises to our hospitable God.

The body of our Savior Jesus Christ,

Torn for you – eat and remember

The wounds that heal, the death that brings us life

Paid the price to make us one.

And we drink of His sacrifice

Around the table of the King.