Home / WOW / Let Not Your Heart

Let Not Your Heart 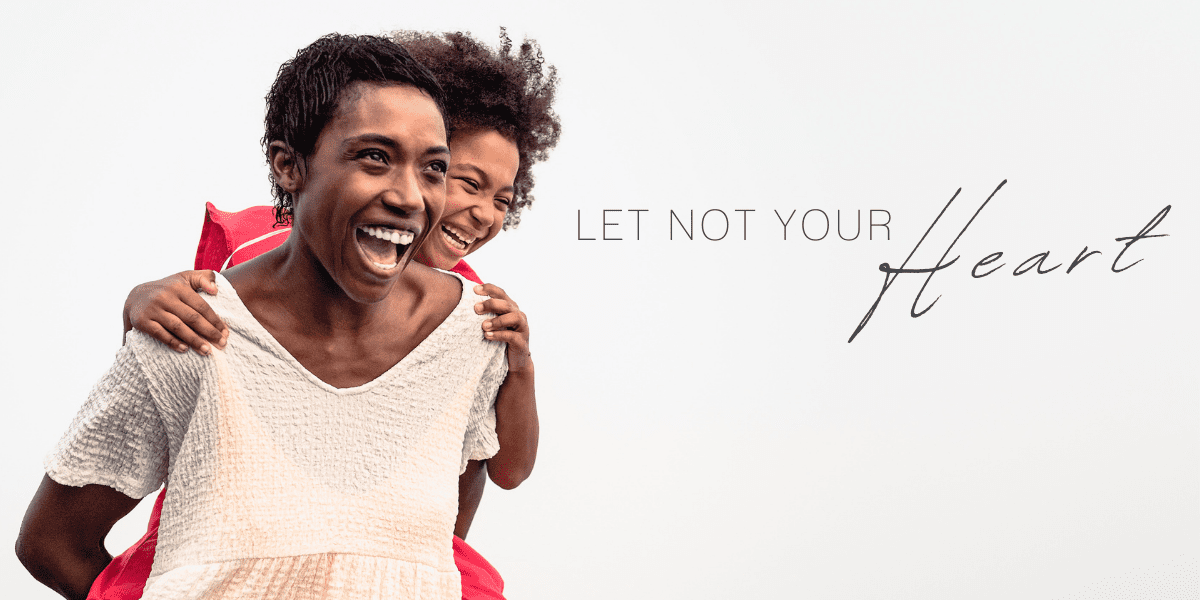 Just yesterday I was sitting in a quiet room with some ladies in my Bible study. We were discussing the Holy Spirit, all the while knowing all the fear and hurt that is running rampant in the world. For a moment I wondered, “Is it wrong for us to be sitting here discussing these things? Should I be more afraid?”

My eyes soon rested on John 14:27 which says, “Peace I leave with you; my peace I give to you. Not as the world gives do I give to you. Let not your hearts be troubled, neither let them be afraid.”

This is Jesus speaking to us and I want to point out one very important word—LET.

Let not your hearts be troubled. Don’t let it happen. Don’t allow your heart to fear.

What does this mean? Well, we have a choice. Will fearful things come to us in this world? Yes. Are there scary things happening right now? Absolutely. But we still have a choice. We can choose fear or we can choose His peace—He gives it to us freely.

So, what do we do when there seems to be no hope? Simply put, turn to Jesus and ask the Lord to open your eyes to the work of His hands.

You see, I can’t help but think of the two followers of Christ on the road to Emmaus. If you are unfamiliar with this story you can read it in Luke 24:13-35. At the beginning of this account, we find these men walking along in fear and worry for Christ has been crucified and they do not know He has risen. They are so lost in their fear and hopelessness that they can’t even see who Christ is when He appears and walks with them. For the many miles of their journey Christ walks beside them, explaining all that is happening and pulling them from their hopelessness. Eventually, their eyes are opened and joy bursts forth.

Can I tell you I don’t want to miss out on seeing Christ? In these days of uncertainty, I don’t want to miss out on His peace or His plan. I worry that my eyes are blind to all He is doing. His plans are far greater than I can comprehend, but there are things He has given us to do. We are to trust Him above all else and to know that in Him death has no hold on us. Don’t you think that makes Satan angry when we cling to hope, especially when fear is running rampant?

Well, I’m tired of Satan tugging away my joy. He will not get the satisfaction of forcing me to live in fear. My days are numbered here on this earth, but they are eternal in Heaven with the Lord and that is worth celebrating!

Read this quote from C.S. Lewis that was written in 1948. Hopefully it will help to shift your focus and remind you that even when the world seems to be crumbling, we are to live for God’s glory alone.

In other words, do not let us begin by exaggerating the novelty of our situation. Believe me, dear sir or madam, you and all whom you love were already sentenced to death before the atomic bomb was invented: and quite a high percentage of us were going to die in unpleasant ways. We had, indeed, one very great advantage over our ancestors—anesthetics; but we have that still. It is perfectly ridiculous to go about whimpering and drawing long faces because the scientists have added one more chance of painful and premature death to a world which already bristled with such chances and in which death itself was not a chance at all, but a certainty.

This is the first point to be made: and the first action to be taken is to pull ourselves together. If we are all going to be destroyed by an atomic bomb, let that bomb when it comes find us doing sensible and human things—praying, working, teaching, reading, listening to music, bathing the children, playing tennis, chatting to our friends over a pint and a game of darts—not huddled together like frightened sheep and thinking about bombs. They may break our bodies (a microbe can do that) but they need not dominate our minds.” – C.S. Lewis

And just like that, when my time comes, I want to be found worshipping, with my heart still on fire for God. I want my lamp to be lit, my heart ready and expectant for the Lord. I’m going to live, not my life, but the life the Lord has given me for my good and His glory. My lamp and my heart will be anointed with the oil of joy that comes from the Lord.

So today, and in these following days, will you commit to prayer? Will you, along with me, seek to praise Him? Will you live life knowing that all is in His hands and that peace is ours for the taking?

And oh, would you remember that all of this is to be celebrated? For though we are all destined for death, Christ came and sealed the promise when His buried body began to breathe. And out of the silence, the Roaring Lion declared the grave had no hold on us (Living Hope, Hillsong United).

So, what will you allow? We are called to stand firm in the Lord, to let not our hearts be troubled and to choose His peace which He gives. Though we may feel weak, He is our strength. So, will you stand and fight in prayer? Will you fight against fear? Against darkness?

Let’s go back to those two followers of Christ and watch as they finally recognize Christ.

Then their eyes were opened and they recognized him, and he disappeared from their sight. They asked each other, “Were not our hearts burning within us while he talked with us on the road and opened the Scriptures to us?” They got up and returned at once to Jerusalem. There they found the Eleven and those with them, assembled together and saying, “It is true! The Lord has risen and has appeared to Simon.” Then the two told what had happened on the way, and how Jesus was recognized by them when he broke the bread. – Luke 24:31-35

It is true! The Lord is risen! I pray that we as believers would live out that joy each and every day with our hearts on fire for God.

So now I ask you, will you live for the Lord, worshipping Him in all you do, even the simple things, from a heart of joy? For Christ has blessed us with His presence and His peace, so now, take it. Accept His peace, tell others of His grace and free gift, live anointed with His joy—and now, for His glory, go live!