Sharp As a Knife 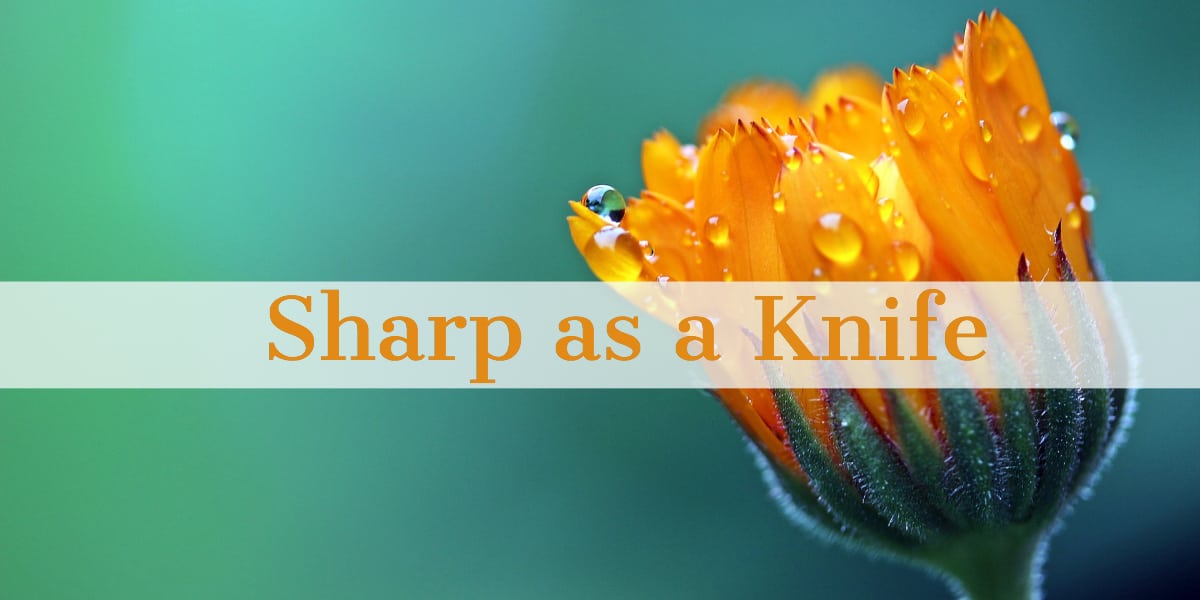 We were right in the middle of a debate. My older brother was angry and I was furious. If there was one thing I was known for growing up in my house, it was being “hot-tempered”. My dad once explained it as being “passionate”, but let that passion off a leash and it turns into a monster.

There I was, standing in the living room, having yet another shouting match. I’m quite certain my mother’s gray hair is not a crown of glory, but a crown of having survived the tumultuous battles forged between siblings.

I wish I could say I was a young child when this happened, but I was a teen and knew better. You see, my brother and I were arguing about a personal situation and in order to protect myself I threw up a shield.

If only it was a shield.

Instead, it was a sharp barb, with precision poison meant to hurt him in the worst way. The words tumbled out of my mouth and hit their target. I remember watching his face fall for just a fraction of a second before he turned and walked away. That was when I felt my stomach drop and the guilt grip my heart.

I used words, painful ones, about a humbling situation he had just experienced and used it against him. I took his feelings about his own self-worth and spoke them out loud.

It’s been years since that happened, and I’m long since forgiven. I would actually be surprised if he even remembers our argument, but I always will. You see, it left a scar along with a realization of how powerful words can be, and how desperate I am to hold up that shield.

But now I want to get a little vulnerable with you. I want to drop the shield I so desperately cling to.

Since the incident with my brother, my words toward others have been better, though I still make mistakes. But there is one victim who has received the brunt of my accusations over the years. This victim has listened to all of the hateful words, said in casual conversation, in blatant accusation, and in jokes. Each word was a knife pointed at the target with appropriate force.

Oh, you know I wasn’t always attacking myself. At least it didn’t seem like it. I would make those small jokes about how I looked “like a slob” when showing up somewhere after a long day. Or I would use phrases like “I told myself those pants would fit again, but that’s not happening,” or “yeah, right like I would be able to do that?” These phrases were often followed by a laugh, myself included. It was meant as a joke, and it was, but deep, deep down, my heart was listening.

You see, there is a part of me that knows how special I am. It knows how the Lord created me to be a masterpiece. So what then am I saying in moments of self-deprecating humor?

Am I casting up a shield to keep others at bay? Am I not allowing my real self to be seen out of fear?

Am I rejecting what the Lord has created in me?

It is when I focus on His Word my thoughts begin to change. The words that come out of my mouth have changed too. For we are told to read His Word, but to not only read it, but to live it, to breathe it, and by the renewing of our minds, to think it.

How then could the thoughts about our own self-worth not change?

Some of you may have children, I don’t yet, but I would presume that at some point in your life you’ve seen a child create something. Maybe it was a drawn picture, a stack of Legos built into a tower, or a craft from VBS, whatever it was, there was a small moment of pride. I’ve seen this with my nephew. He brings his little creation over to me and looks up with these beautiful brown eyes and waits for my approval.

How could I ever say anything against what he has created? It came from the purest and best part of his little three-year-old heart.

Now then, why do I think that I should say something against that which the Lord has created? Out of Himself, he created you and He created me. If we believe that, truly and wholeheartedly believe that, we should be looking up and praising God for who He made us.

My prayer today is that you join me in this journey of watching the tongue. That you realize how the way you speak of yourself reflects the way you think the Lord sees you. He has called you His beloved, so don’t go calling yourself anything else!

Remember, our words can be knives pointed into our own hearts, but I ask you to read this final verse. For what is sharper than a sword? And what can transform the way you talk to yourself?

It is the Word of God.

For the word of God is living and active, sharper than any two-edged sword, piercing to the division of soul and of spirit, of joints and of marrow, and discerning the thoughts and intentions of the heart. – Hebrews 4:12