Steps to the Cross: Redeemer 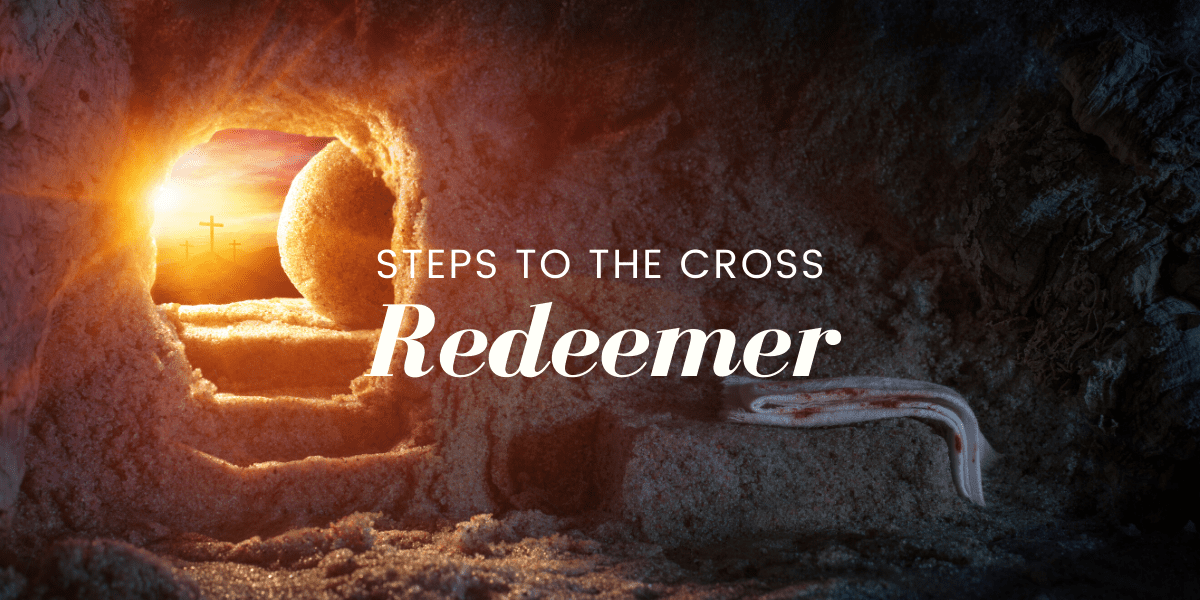 Then Jesus, calling out with a loud voice, said, “Father, into your hands I commit my spirit!” And having said this he breathed his last. – Luke 23:46

Over the past seven weeks we have journeyed through the last words of Christ and the tabernacle furnishings. And each week we have drawn nearer and nearer to the throne of God. Jesus has been our all access pass through this journey. We have received a first hand account of the agony, the finality, and the totality of His sacrifice.

With His last words, “It is finished!,” from John chapter 19 and “Father, into your hands I commit my spirit!,” from Luke 23, no longer is the curtain pulled back for us to gain a mere glimpse. No, the curtain no longer separates but rather unveils the Most Holy Place, drawing us into the throne room of God. Just as Isaiah saw the train of God’s robe fill the temple and worshiped before the Lord in his vision, so the torn veil draped as a royal pathway on the floor of the tabernacle, now invites us into the presence of God with Jesus as our Mediator.

With these final words, Jesus becomes both High Priest and sacrifice. He walks into the Holy of Holies where God’s presence and power dwell, offering Himself as atonement for the sins of the world.

Before we look further at Jesus’ work as High Priest and sacrifice, however, let’s savor the final words of the Savior on the cross.

Jesus said His last words in a loud voice. His was not a death rattle of defeat. But rather, just as Jesus cried “It is finished!,” with victory, He shouted with boldness,

“Father, I give you my spirit.” Death did not defeat Jesus; Jesus defeated death. With willingness He handed His Spirit over to God.

Jesus also calls on God as Father in His last words. Earlier in the day, He used a more formal name for God. Jesus called out to God using these words, “Eli Eli.”

“My God, My God.” He spoke to God, not as His Son in that moment, but as the One in whom the sins of the world were laid upon. He spoke to God as the Powerful Creator, not as a loving father. Now, in His last moments, He speaks intimately to His Father. These words embody relationship and display “Sonship.” Perhaps Jesus called on His Father to remind us that because of His work on the cross, we could call on God as our Father because we would be adopted as sons and daughters.

Then, as Jesus said, “Into your hands,” He placed His ransomed life into God’s hand. Jesus made the exchange. Jesus bought us with a price by placing Himself on the Altar of Sacrifice and into the hands of the One who rules and reigns. Much like the priest would lay His hands on the sacrifice and transfer the sins of the nation onto the sacrificial lamb, so Christ, our Sacrificial Lamb, with hands nailed open on the cross, placed His crushed Spirit into the hands of the Father. And this act of love and humility pleased the Father. (Isaiah 53:10a)

Can you imagine the High Priest outside of the Tabernacle tying the animal down to the brazen altar, laying his hands on the sacrifice and slaughtering the animal?

For the life of the flesh is in the blood, and I have given it for you on the altar to make atonement for your souls, for it is the blood that makes atonement by the life. -Leviticus 17:11

With sacred steps the High Priest would walk into the Holy Place to perform various duties before entering behind the veil. Then the time would come to approach the veil. The priest would flick blood toward the veil as a symbolic cleansing, then make his way behind the curtain into the Most Holy Place as was customary. There he would stand and worship at the Ark of the Covenant, witnessing God’s glory that rested atop the Mercy Seat.

The Ark was made of acacia wood and overlaid with pure gold, and housed a jar of manna, Aarons’ rod that budded, and two stone tablets on which the Ten Commandments were written. The Mercy Seat or Atonement Cover served as the lid for the Ark. Flanked on each side of the Mercy Seat were two gold cherubim with wings lifted upward in worship.

As the priest made his way toward the ark with blood in hand, he must have felt so vulnerable—sinful man, approaching a holy and righteous God. With the presence and power of God in his midst, the priest made the deposit, the payment, the ransom for sins by sprinkling blood on the Mercy Seat as atonement for himself and the people.

On the cross—Jesus—both high priest and sacrificial lamb entered the Holy of Holies on our behalf, depositing Himself into the hands of God to pay the ransom for you and for me. “Into your hands I commit my spirit.”

But the story of redemption does not end there. No, the reason we can celebrate isn’t because Jesus stepped over the torn veil and into the Holy of Holies. Redemption is found in the tomb where Jesus became the mercy seat for a moment. Dead and laid in the tomb Jesus went to hell and back for my sins and yours. Jesus descended into hell and then ascended to His Father in heaven. And on the third day all the power and glory of heaven enveloped that tomb and Jesus lived again!

Now Mary stood outside the tomb crying. As she wept, she bent over to look into the tomb and saw two angels in white, seated where Jesus’ body had been, one at the head and the other at the foot.

Do you see the image of the Mercy Seat in the tomb? The angels—one at the head and one at the foot—where Jesus’ body had been placed as the Sacrificial Lamb serves as a picture of the Holy of Holies where the glory of God received the deposit for our sins.

Now as High Priest, our risen Savior invites us to come boldly into the Most Holy Place to receive mercy and find grace because of His redemptive work on the cross. No longer do we live under the Old Covenant with its sacrificial requirements. Now believers have unfettered access to God through our Lord Jesus Christ. (Hebrews 9:11-12, 15)

Not only do we have access to heaven’s throne room, but just as Christ is seated at the right hand of God the Father, so we are seated with Him in the heavenlies. (Ephesians 2:4-7)

Thank You, Jesus, for willingly giving Your life for mine. Thank You for taking my place and paying my redemption price. Thank You for seating me in the heavenlies with You. Empower me to live in such a way that others see Your loving kindness in me. Help me bring You the glory You so deserve. In Jesus’ name, amen.