The King of Life 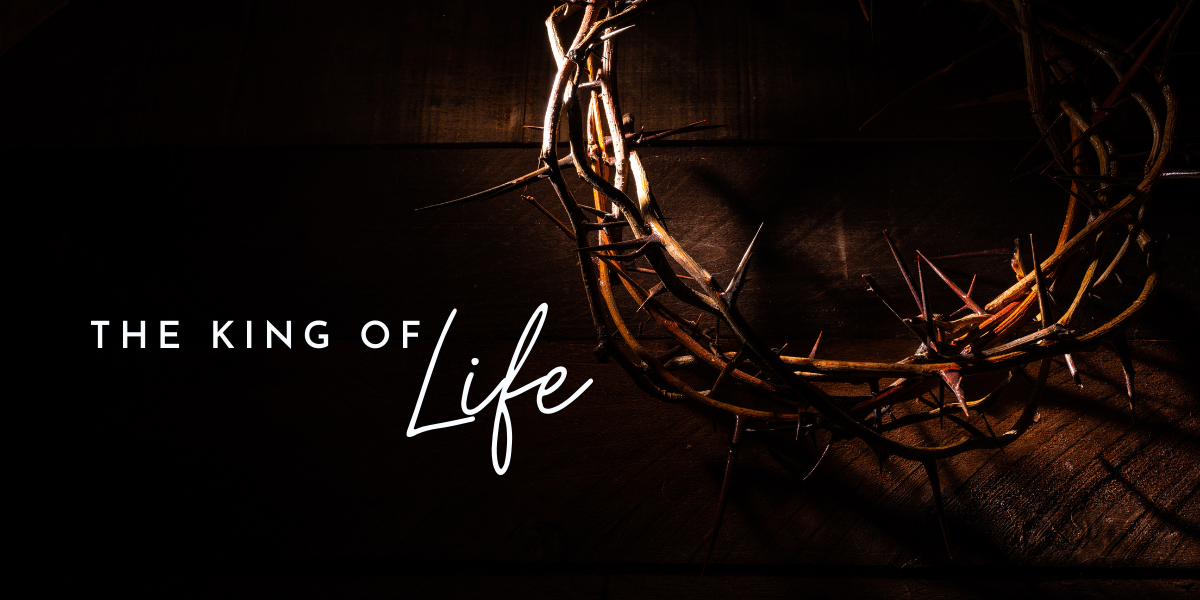 This is the declaration of Mary Magdalene as she returns from the tomb of Christ—the place that once held death and was now a holy ground of life evermore. Her words are a celebration, a cry of joy for what was once dead and gone, is now alive and present! Mary, the woman whom Jesus had cast out seven demons, was the first to see the risen Christ.

Have you ever had a moment in your life that you knew was from the Lord? Think back. I think of childhood and the redemption in my life, the head knowledge of God that was established and then transformed as my family walked through difficult life circumstances. I remember seeing God’s hand in college decisions, in life pathways, and more recently, I have witnessed the Lord move and work in ways I never could have comprehended. It’s through these moments and experiences that the eyes of my heart have been opened and like Mary, I can declare, “I have seen the Lord!”

Just the other morning, I was reading through Scripture, and I was hit with the reality of God’s relentless pursuit of His people. The reading plan I am using has me delving deep into Scripture, but also jumping to different sections. Some days I am in Genesis, other times Matthew, then Ezra and Acts. But no matter the section of Scripture, there is a common thread that is becoming more and more prominent as I read each day.

Our God is a God who relentlessly pursues us, in order to deliver us.

Think about it. In Genesis, we have Noah and his family saved from the flood. In Ezra, we have the restoration of God’s people from exile—His love for them bringing them home. In Acts, we see God using the disciples to be the foundation of the church and to preach salvation to both Jews and Gentiles. And then, of course, in Matthew (and all the Gospels), we have the peak of redemption as Christ pays the final price for our sins and restores us to right relationship with Himself.

Repeatedly, the Lord is saving His people. He pursues them, calls them forward and rescues. Even all the way back to the Garden of Eden, after the Fall, God asks Adam and Eve where they are.

Then the man and his wife heard the sound of the Lord God as he was walking in the garden in the cool of the day, and they hid from the Lord God among the trees of the garden. But the Lord God called to the man, “Where are you?” – Genesis 3:8-9

The Lord God made garments of skin for Adam and his wife and clothed them. – Genesis 3:21

So, come a little closer and see.

See the way the Lord has moved and worked to save His people. To save you, to save me. The King of all creation boldly goes before us, calling us unto Himself to robe us in His righteousness—to set us apart and save us.

On the cross, Christ took our sin upon Himself and handed off His garment of righteousness so we could be restored to right relationship with Him.

When Christ breathed His last on the cross and declared “Tetelestai” (It is finished)—it truly was finished (John 19:30). The price is paid, and we are restored.

There is a song by Jeremy Riddle called “All Hail King Jesus” that has a line which has given me chills ever since first hearing it. The song begins:

And now, I want you to come a little closer and think of the moment when Christ took His first breath three days later. Death defeated—light to reign forevermore!

What an illustration! The King of Life on the move, His ever-pursuing joy and love seeking His people.

Remember that this week as we enter Holy Week. Take time to ponder and recall the ways Christ walked through the Garden, sweated blood, walked through the valley of death back to Jerusalem. How He carried the cross to Golgotha, how He was nailed to the cross, how He took on our sin, and how, after three days, He rose again! Ponder these movements, these places of action and remember that He is a God who pursues His people. The same God who was moving the in the Garden of Eden to cover the nakedness of Adam and Eve, is the same God who crossed through the Garden of Gethsemane to cover our sin and shame. He is pursuing you, delivering you from death, and no one says it better than Paul in 2 Corinthians:

For we know that if the earthly tent we live in is destroyed, we have a building from God, an eternal house in heaven, not built by human hands. 2 Meanwhile we groan, longing to be clothed instead with our heavenly dwelling, 3 because when we are clothed, we will not be found naked. 4 For while we are in this tent, we groan and are burdened, because we do not wish to be unclothed but to be clothed instead with our heavenly dwelling, so that what is mortal may be swallowed up by life. 5 Now the one who has fashioned us for this very purpose is God, who has given us the Spirit as a deposit, guaranteeing what is to come. … Therefore, if anyone is in Christ, the new creation has come: The old has gone, the new is here! 18 All this is from God, who reconciled us to himself through Christ and gave us the ministry of reconciliation:19 that God was reconciling the world to himself in Christ, not counting people’s sins against them. And he has committed to us the message of reconciliation. 20 We are therefore Christ’s ambassadors, as though God were making his appeal through us. We implore you on Christ’s behalf: Be reconciled to God. 21 God made him who had no sin to be sin for us, so that in him we might become the righteousness of God. – 2 Cor 5:1-5, 17-21

The Lord Himself robes us in His righteousness. He is a King on the move, a King of life in pursuit of you. Each movement on the cross was to pay the price you owe, that I owe, and to restore us with the hope of Heaven and dwelling with Him for eternity.

Now that, is a reason worth celebrating! It is a reason to look up and thank God for what He has done, and it is why Mary ran and declared, “I have seen the Lord!” He called her to Himself by name, and she suddenly knew it was Him.

Shane Padgett said it best when in his message when he stated that people can argue about politics, theology and apologetics but, “People can’t dispute a life that has been changed by Jesus.”

No one can take that away from you. Remember that moment, and cling to it. Remember Christ’s work on the cross and celebrate it, praising Him for His relentless pursuit in loving you, and then go and declare it, stating, “I have seen the Lord!”