Home / WOW / From Trial To Triumph

From Trial To Triumph 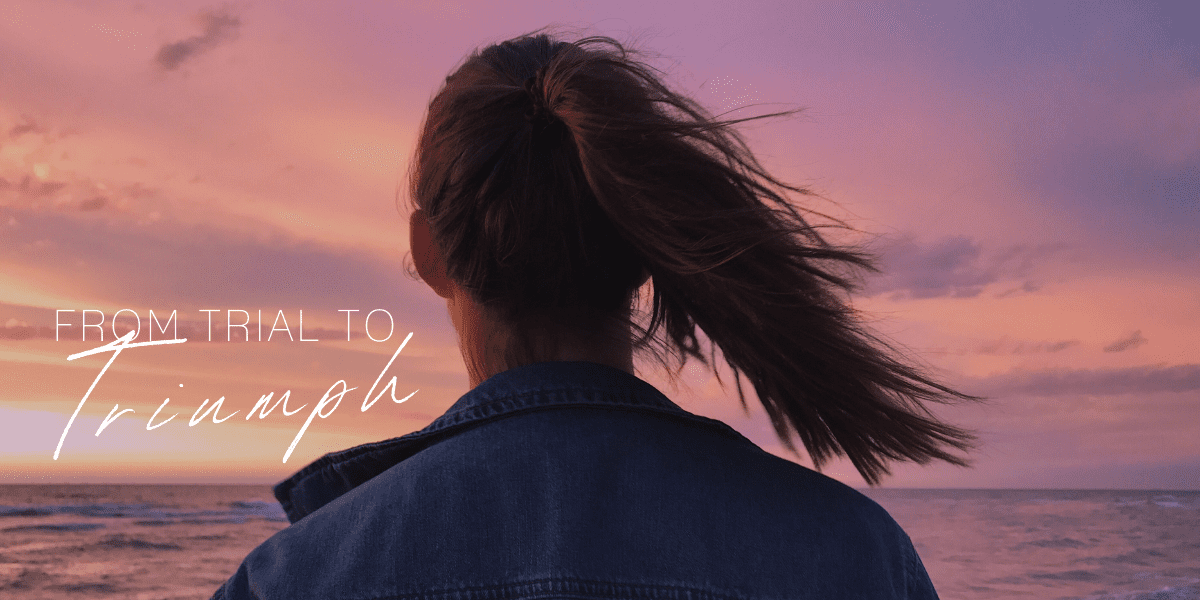 “If I perish, I perish”….the words I heard from a smiley passenger in the back as our group traveled up an unknown road in search of an unknown view on Lookout Mountain, Colorado. There were no errors and rarely any signs, but we thought, surely there will be a lookout if this is “lookout mountain.” I may have said a few times that we should turn around. We drove for about 10 minutes, passing interesting paths and making turns that didn’t make sense, but after a few more miles, we noticed a gap in the trees. We pulled off on a muddy curb and edged our way to a rocky drop-off. In the distance, the Rockies gleamed with snow in the middle of summer. So worth it.

Do you ever feel like this in life? Just like the Carrie Underwood song, “Jesus, take the wheel!” When you simply feel so out of control, that you know the only thing left to do is rise up and trust in the one who is actually in control. You continue down the path until eventually, God’s goodness is revealed and it’s even better than you could imagine.

I think of this very scenario so often when I read through the book of Esther. Let me set the scene. King Ahasuerus is looking for a wife after a disagreement with his former wife, Queen Vashti. His councilman advised him to gather young women so that he could choose a new wife. Esther, a Jewish woman (although unknown to the King), was pulled from a simple life into the presence of a king and won his favor almost instantly. She was showered with lavish gifts, food, and dresses. He then decided that she would be the next queen.

When a royal decree was named that would result in the destruction of Jews throughout the land, Esther had a big decision to make. Would she keep silent and do nothing, or would she dare enter the presence of the king without summons and reveal her true identity in order to save her people? Could she risk her life to save others?

Oof. If you’d ask me, I’m not sure I would have had the boldness to take those steps forward.

If you keep silent at this time, relief and deliverance will come to the Jewish people from another place, but you and your father’s family will be destroyed. Who knows, perhaps you have come to your royal position for such a time as this.”

Esther sent this reply to Mordecai: “Go and assemble all the Jews who can be found in Susa and fast for me. Don’t eat or drink for three days, night or day. I and my female servants will also fast in the same way. After that, I will go to the king even if it is against the law. If I perish, I perish.” – Esther 4:14-16

Thinking through those “Jesus take the wheel moments,” do you ever consider how valuable your part is in the struggle? You, my friend, are a huge part of God’s story of faithfulness.

Leaning into obedience and walking in faith can result in a sharp turn from trial to triumph. If you will only rise up.

I want to pray for the same kind of boldness that Esther had. Stepping up into that royal court, watching as people gasped at the breaking of the law, risking her everything so that she could carry out the unseen plan of the Lord. If I perish, I perish.

You won’t be surprised to know that because of the king’s favor, the Jews were saved and the decree was reversed.

There’s a beautiful song recently released by a few female Christian artists called, ‘Rise Up’. There’s a line that sums all of this up so perfectly –

“Tell me a story about the way I’m loved completely

Because Your beauty is my covering, I have the favor of the King

Tell me again about how I can stand up boldly

I hope you’ll take a moment this week to read through the whole book of Esther to see the continued faithfulness of the Lord from the beginning to the end and how we can be just like Esther in our everyday lives.

Lord, it gives me chills to think of what Esther did in light of her love for you and her people. Father, can you give me opportunities to be just like that in this world. Thank you for making me a part of you story. I am not worthy, but goodness am I grateful for the grace that put the robe upon my back. I don’t want to miss this. Help me rise up for such a time as this. Amen.