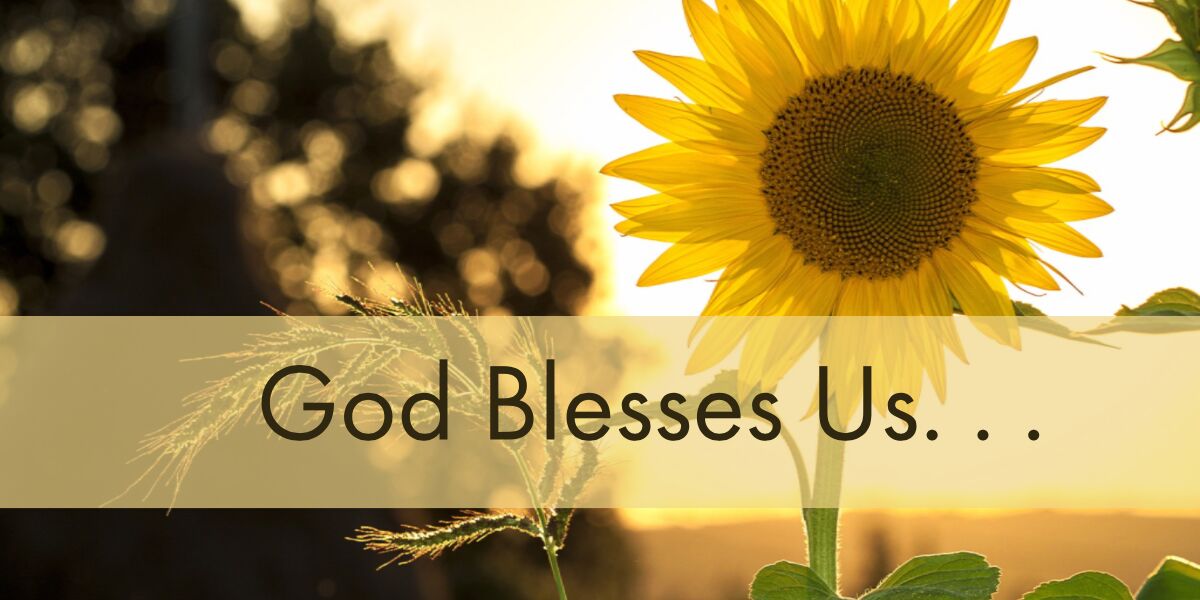 What have you written there? Is it something about family? Work? Praising God?

For me, I would put, “God blesses us so that we can bless others.” At least until recently, that’s what I thought.
I was reading through the book of Psalms again and for the first time I noticed this verse, Psalm 67:7. It says, “God blesses us, that all the ends of the earth may fear Him.”

I wondered about my little phrase and thought, “I’ll bet my version of this is somewhere in the Bible.” So I turned to Bible Gateway, an online resource, and conducted various searches for the phrase “God blesses us so that…” and began to look at the answers. I was shocked to find that nowhere it said “so that we can bless others.” Perhaps it is somewhere in the Bible, but I couldn’t find it.

Now in a way, the two ideas are not completely incongruous, because to bless others would include telling them about Him. That just wasn’t how I’d thought about it before. I had always thought that He gives us wealth, talents, and other gifts so that we can use them to help those who are lacking—but that’s not really what it’s all about.

But what do we mean by fear? It is not an unholy or terrified fear, not the kind we think of in scary books or movies, but respectful fear. Fear that comes from a heart which reveres the Lord. It is reverence, it is worship. The Lord blesses us that others might fear (worship) Him.

Just above verse 7, in verses 5-6, it says, “Let the peoples praise You, O God; Let all the peoples praise You. The earth has yielded its produce; God, our God, blesses us.” This psalm praises God for his provision, but why did He provide? He brought forth provision from the earth so that “all the ends of the earth may fear Him.” Of course, God wanted them to have food to eat and I’m sure they enjoyed the bounty, but He also did it so others would revere Him.
I believe this psalm was written to Israel. “God blesses us (Israel) so that all the ends of the earth may fear Him.” We know that Israel was chosen by God to be His nation, His people. Unfortunately, Israel did what we all tend to do. They accepted their “chosenness” as proof that they were superior to other nations. They received God’s blessings to use for themselves—without truly understanding the meaning behind His provision, His blessings.

The other nations were aware of their special designation. In the book of Esther, Zeresh, Haman’s wife, warned him, “If Mordecai, before whom you have begun to fall, is of Jewish origin, you will not overcome him, but will surely fall before him.” She knew that God had chosen the Jews as His people. Maybe she had heard about how God had blessed the Jews. She knew enough about the Jews to fear their God. Her prediction was correct. Haman fell, or was hanged, as were his ten sons.

Isn’t this principle true for us as well? God blesses us, those grafted into the vine through Christ Jesus, and He does it for the same reason—so that all the ends of the earth may fear Him. We pray for God to bless us and to bless others. But what do we mean by that? Do we mean to provide for our needs? To keep us safe from harm? For good health? Yes! All of these are blessings, but our response to these blessings is what is missing.

When we have much, we feel like we deserve it. We think God has blessed us because we are good people, obeying His commands. We think of our blessings as our rightful reward for being good. However, if God blesses us so that all the ends of the earth may fear Him, maybe it doesn’t have anything at all to do with our behavior or deservedness. Maybe it’s for His glory.

I had just returned from my second mission trip to South Africa when this thought reached out and grabbed me. You know, it costs a lot to go to South Africa for 10 days, twice, a lot more than I had ever paid before to go anywhere. In addition to the expense of the trip, it costs time away from home and family. It costs wear and tear on the traveler, too. But the fact that I’m able to pay the price, to make the trip and to endure swollen feet and ankles and long times without good sleep means that I’m blessed. God has blessed me with the ability to make such a trip. Based on this verse, I believe He enables me, or blesses me, so that I can go to “the ends of the earth” so that people there can fear Him.

When I was asked to go on both of these trips, I wanted to know that I was, indeed, called. That was confirmed many times over in the days following and I had complete peace in my decision to go. I’m not a preacher, but I do know Jesus and spend time every day talking to Him and studying His word.
In Acts the priests were wondering about Peter and John, who had been healing people and preaching with authority. In verse 4:13: “Now as they observed the confidence of Peter and John and understood that they were uneducated and untrained men, they were amazed, and began to recognize them as having been with Jesus.” That’s what qualified them and it’s what qualifies me and you. We might be “uneducated and untrained” but it’s time spent with Jesus, getting to know Him and being His companion, that allows us to speak.

During my first trip to South Africa, I had the good fortune to speak with an African woman about our mission there. I expressed to her my thoughts that the money the ten of us had spent to go there might be better used if we just sent it to them to get the things they need. She said, “No. We don’t need money! We need unity. The people ask us, ‘What are those white people doing at Zola’s house? Why are they there?’ We tell them that God told you to come here to help us. Many people will go to church to learn about God because you came here. Some will be saved.” I agreed, saying, “Jesus told us to go into all the earth to preach the gospel.” She said, “Yes, Jesus!”

She knew Jesus and she understood. I thanked her. She had just explained to me why it’s important to go. I have heard it my whole life, but for the first time, I experienced it.

God has blessed me. I know that He wants me to use what I have to bless others, but ultimately it’s all about Him and His purposes. It’s so all the ends of the earth may revere, worship, and fear Him.