He Calls My Name 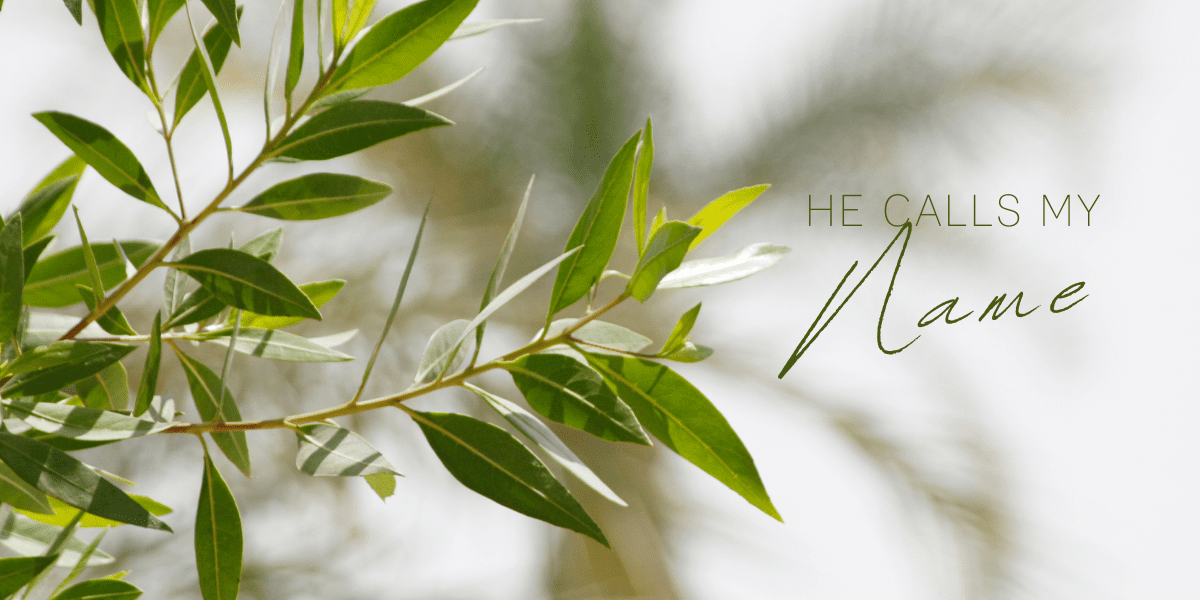 Shock. Fear. Uncertainty. Confusion. We’ve all experienced monumental moments when overwhelming emotion ruled our thoughts, actions, and reactions. Those moments when adrenaline rushed in, causing a surge of energy or a paralyzing response of frozen fear.

I imagine these same emotions overwhelmed Jesus’ followers as they discovered the stone had been moved on that first day of the week. Expecting to persuade the guards to move the stone for her so she could embalm His body, Mary Magdalene walked into a scenario for which she was not prepared.

Scripture tells us in John 20:1 that Mary came to the tomb early while it was still dark. Saddened, yet eager to approach the tomb because of her love and respect for her teacher, Mary made her way through the dim dewy morning light with spices in tow. You see, there had not been time to properly prepare Jesus’ body for burial on Friday, because the Sabbath quickly approached, and Jewish law prohibited this type of labor on that holy day rest.

Rest? How could His followers rest?

Just having witnessed the brutal assassination of their Lord, emotions soared, tears poured to puddles, and minds raced with confusion, doubt, and disappointment. But today, today Mary’s duty and loving action was certain. Jesus body needed preparing so that it was suitable for burial.

As Mary approached the tomb, grief-stricken and lost in a sea of emotion, she did not find the stone securing the tomb. Instead Jesus’ grave stood open, exposed and violated. Not knowing how to proceed, Mary ran. She ran to the disciples with panic.

“They have taken the Lord out of the tomb, and we do not know where they have laid Him.” – John 20:2b

With disbelief, Peter and John ran to see for themselves. As they entered one by one, only evidence of a dead body remained. Linens lay where Jesus once rested cold and dead. His face cloth folded in neat fashion nearby, gave clues of His departure, but I’m not certain they were convinced of what they saw.

Scripture tells us that John saw the evidence and believed. But what exactly did He believe? Did John believe what Jesus had prophesied all along? Did a resurrection really take place or had the body been stolen? John and Peter left wondering, but Mary remained. Not satisfied and not willing to accept the unanswered questions, she intended to investigate and discover Jesus’ whereabouts.

I believe Mary to be tenacious, strong from the wounds of her past, not hard as many who had lived the nightmare that once controlled her. Courageous and brave, grateful for her new life, and focused on knowing and serving her Lord above all other things, from the moment Jesus rescued her, Mary got her life back all because of Jesus. The demons that once controlled her had been relinquished of their control over her, and the Spirit of God ruled and reigned, filling her to full when she encountered Jesus and He performed that miracle of redemption in her life.

Has Jesus worked a miracle in you? If you have received salvation, then your heart should resound, “YES!” But what other miracles has Jesus accomplished to bring you freedom? The miracle of ceasing to chase after an idol that once consumed you? The miracle of freedom from fear so you could be brave in difficult circumstances? What about the miracle of daily grace that Jesus extends to each of us, helping us overturn those every day battles of stress and strife that overwhelm us?

Yes, Mary’s love, tenacity, and complete need for Jesus presence in her life led her to press on in her search for truth.

So she continues her investigation. Verse 11 says,

“But Mary stood weeping outside the tomb, and as she wept she stooped to look into the tomb.”

And what did she see?

Scripture says that upon looking into the tomb, Mary saw two angels, one standing at the head of the place where Jesus had rested and one at the foot. Then they spoke, questioning her as to the reason for her tears. After responding to the angels regarding her Lord’s whereabouts, she turns and sees Jesus, but she does not recognize His face or His voice. Instead, she thinks He tends the garden.

I imagine by this time light is dawning. Perhaps, blinded by the morning sunlight or blinded by her tears and fears, her vision was impaired. But when Jesus called her name, “Mary,” that’s when she knew. At that moment she recognized Jesus’ voice, His presence, and His power.

What thoughts and emotions must have flooded her mind. And although she didn’t have full understanding of what had taken place, she knew her Lord lived again. His presence gave evidence to the truth her heart and mind struggled to understand.

Mary’s response? Worship, praise, thanksgiving, joy. Elated she reached out to hug Jesus, but she could not. Instead, she listened and obeyed.

I’ve always wondered, though, why Mary couldn’t recognize Jesus with her eyes or her ears. Did he look and sound so different?

I think she, so much like us in the midst of crisis, was so captured and captivated by her grief, fear, and disappointment that truth was blinded from her.

There are times when I have struggled to see Jesus in my situation. Times when I have focused so intently on the problem that the solution was hidden from my sight. Blinded by emotion, the fog of fear covered any evidence of Jesus. But then in my heart the Spirit spoke my name, and I knew. I sensed Jesus’ presence, felt the joy of His salvation, and leaned into the warm embrace of His grace in my most vulnerable moments.

What are you struggling with today? Are you lost in a sea of emotion? Do you think your problem is stronger than the power of Jesus? Are you blind to the presence of the Lord in your situation?

I want to choose to be like Mary Magdalene in my moments of turmoil, don’t you? I want to be tenacious in my search for Him, vigilant in my stance, courageous and brave as I press on to find even a glimpse of Jesus, for He is the only solution to my problem.

We can rest knowing that if we continue seeking, we’ll find Him. He’s always there. He never leaves us or forsakes us. He never misses an opportunity to grow us, mold us, and shape us into visions of His glory.

That reality had to change the way she perceived herself, and the way others perceived her forever. No longer did remnants of a demon-possessed girl lurk in her shadow. No. Mary had the honor of being the first to witness Jesus’ resurrection and to share the glorious testimony of the knowledge of His conquering death and ushering in salvation to all who would believe.

This monumental moment, which began in an emotion of frenzy, did not end in paralyzing fear but rather extraordinary faith. All because Mary continued her search for the Lord and did not give up in her pursuit of finding Him.

I don’t know your situation but let Mary Magdalene encourage you today. Don’t give up, friend. Keep looking for Jesus and listening for His voice. Be tenacious, courageous, and brave in your pursuit of and dependency upon Him, because that my dear one will lead you through a life of extraordinary faith.