Home / WOW / Take Care of That

Take Care of That 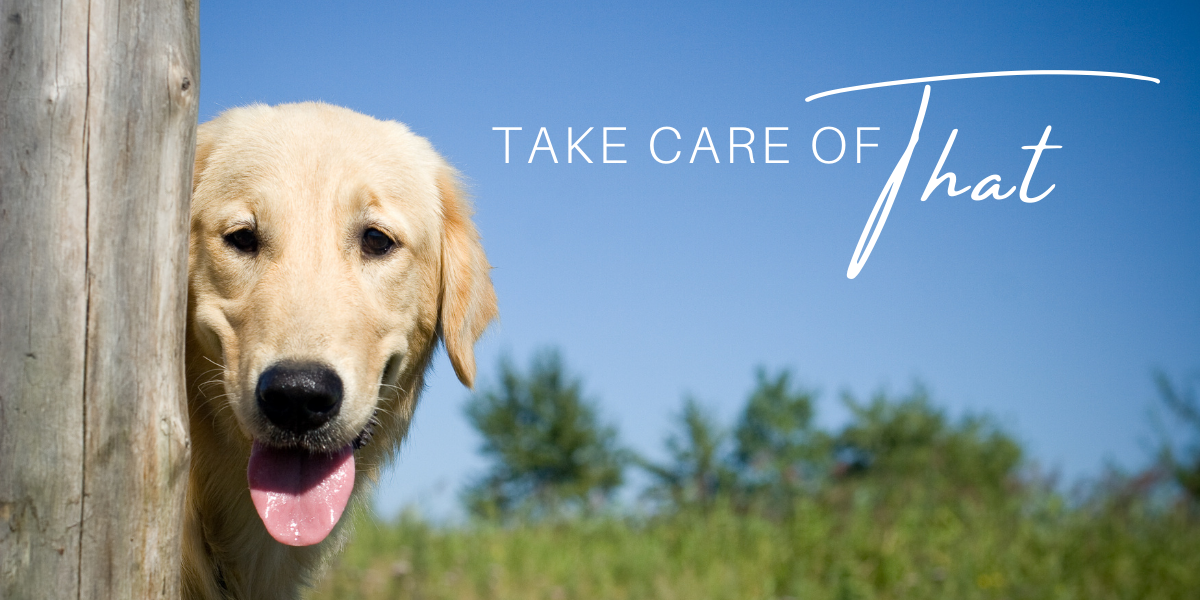 My golden retriever, Sven, is now a year old and just as a lazy and clumsy as ever. He likes to find as many sticks as possible and rip them to shreds on the back porch. Sometimes he actually eats them, other times he pulverizes the bark into mulch. I’ve wondered if I should start an “organic mulch” business. I could spin some ridiculous notion of dog saliva and natural mulch…it could work, there are certainly crazier things that have been done. Couldn’t I make up some nonsense about the health benefits of dog saliva?

I am kidding of course.

But now that I have your attention, I want to share with you an encounter I had a few weeks ago that I believe was the presence of the spiritual realm. Now, before I lose you and you pump the brakes, remember the Holy Spirit. He is a presence, a being, and is alive in us.

Even Ephesians 6 tells us of the spiritual realm.

The Word is true, so therefore, I believe what happened in my room the other night was not a coincidence.

I was climbing into bed, plugging in my phone, ready to lay down and get some much needed rest. Sven had been outside, he had water and food and our normal routine was complete, all that was left was to relax. I was exhausted from a long week, too many restless nights and early mornings.

There was only one problem…Sven was panting and pacing the room. He kept bumping into the bed and then standing at the door. Back and forth he walked. I had a moment of “Maybe if I ignore him, he will lay down.” But that never works, does it? A few times he did lay down, only to jump back up as though something had smacked his backside or pinched him. It was odd.

With a groan, I threw off the covers and opened my bedroom door. Sven bolted.

I wrote it off as him needing to go to the bathroom so I followed him, only to find him at the bottom of the stairs waiting for me. I practically forced him to go outside and he clearly didn’t need to do his business, so I called him back to me and we walked upstairs. Everything was fine until we got halfway down the hall to my room. Sven stopped.

It wasn’t the kind of “tail-wagging at my side” stop. He simply halted and wouldn’t walk forward—his legs braced wide. Again, very odd.

I called him and he slowly inched forward, peeking his head around the corner, but it was evident he didn’t want to go into my room. An inkling built in my mind even as exhaustion pulled at my body. I wondered if this was about to be a Balaam and the donkey moment. Perplexed, I asked the Lord for protection, just a simple, “Help me,” and I pushed Sven into the room with me.

Laying down, I convinced myself that I was being ridiculous and that all of this was mere coincidence. For a moment it was quiet and then I heard the pacing again. Sven had jumped up like something smacked him and was nearly pawing at the door.

It’s funny, now that I think on it, but fear didn’t have a moment to grow. Perhaps I was too tired, but I just didn’t feel like handling this problem. And so, I did something that was both child-like and yet, was a response I wish I always had.

Into the darkness of the room as Sven pawed at the door and paced, I rolled onto my side and said out loud, “Lord, I’m gonna need You to take care of that.”

I didn’t mean Sven, I meant if there was some spiritual presence in the room that needed to be dealt with, the Lord would need to handle it.

Not ten seconds later, Sven moved away from the door, laid down and gave a heavy sigh. He was asleep a moment later, and so was I.

The following morning, these moments came back to me and I wondered if I had dreamt it all. I know I didn’t, but it all seemed so strange and yet simple.

You see, I wish the way I had responded was my go-to when darkness is closing in. I wish that rather than shaking in fear I would rest in child-like faith and trust, knowing the Lord will keep me safe.

Christ even says, in Matthew 18:3, “Truly I say to you, unless you turn and become like children, you will never enter the kingdom of heaven.” Is that what this is? A simple and yet profound reliance on God, that He can and will rescue those who put their faith in Him?

I think so. And can I tell you, it’s freeing, to pray a prayer like that. It tells your problem or situation just how mighty God is. It tells the world that you rely on God more than man. It is faith that is grounded in His love and the knowledge that nothing can separate us from Him.

Oh, that must frustrate the devil when we become like stubborn children saying, “No,” over and over again to his ploys and manipulations. He must writhe with anger as we cling to the Father as He holds us and leads us. Perhaps my simple prayer frustrated whatever may have been in my room that night. All I know is that is was dealt with when Jesus entered the picture—that is power!

Today, my encouragement is for you to be like a child. Be a stubborn toddler and refuse to budge when it comes to the devil’s schemes, because he can and will scheme. This week when the spiritual forces push on you, lean back in trust, even if you’re tired and tell the Lord, “I’m gonna need You to take care of that.”

For that phrase alone relies on faith and brings forth a strength unlike anything we can ever grasp outside of the Lord. It is power to fight against the spiritual forces of evil, for our good and for His glory.

For this reason I bow my knees before the Father, from whom every family in heaven and on earth is named, that according to the riches of his glory he may grant you to be strengthened with power through his Spirit in your inner being, so that Christ may dwell in your hearts through faith—that you, being rooted and grounded in love, may have strength to comprehend with all the saints what is the breadth and length and height and depth, and to know the love of Christ that surpasses knowledge, that you may be filled with all the fullness of God. Now to him who is able to do far more abundantly than all that we ask or think, according to the power at work within us, to him be glory in the church and in Christ Jesus throughout all generations, forever and ever. Amen. –Ephesians 3:14-20