Home / WOW / To Die Would Be An Awfully Big Adventure

To Die Would Be An Awfully Big Adventure 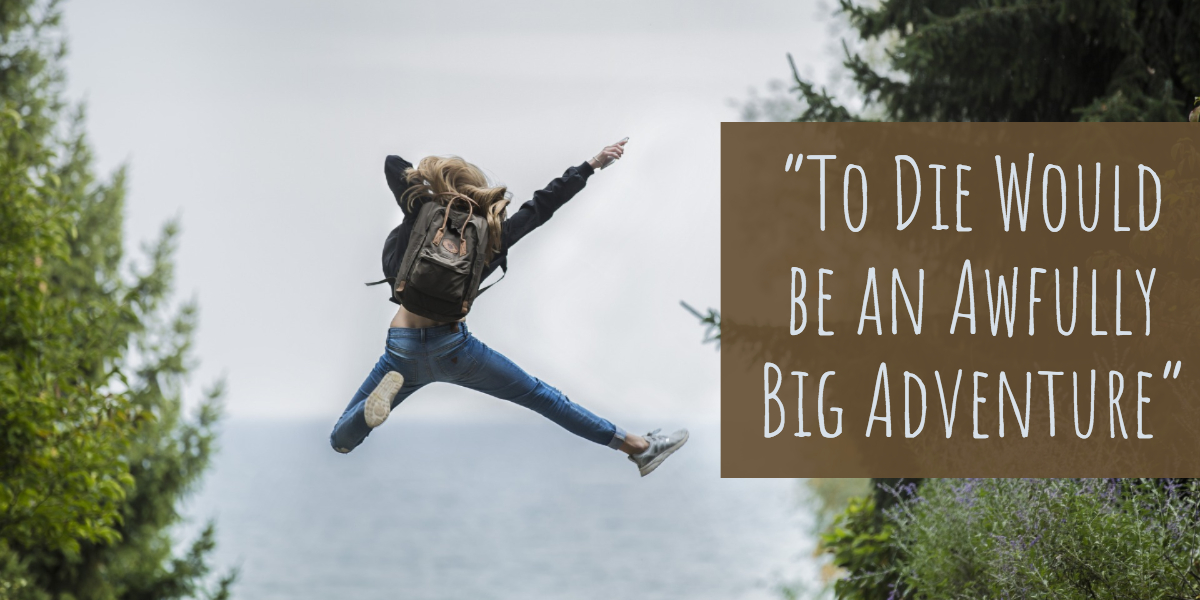 Back in the late 1800s, a man by the name of J.M. Barrie wrote many literary pieces. By the early 1900s, he would create one of the most recognizable and popular characters ever to grace stage plays, book pages, and eventually the big screen. Peter Pan, or the boy who wouldn’t grow up.

It’s quite a funny concept, the boy who wouldn’t grow up. I know a few men in my life who have a Peter Pan mentality, but that’s a whole other story.

Anyway, Peter Pan lived in a far off place or to be exact it was “the second star to the right and straight on ’til morning.” Neverland was a magical place where Peter Pan didn’t have to worry about the daily problems that adults face. His biggest problem was making sure Captain Hook and his pirate crew didn’t ruin his fun with the Lost Boys. That actually sounds pretty nice right? A magical place without adult problems.

For some reason, Peter Pan has been at the forefront of my mind, I didn’t know why until now.

Recently, I have been surrounded by a lot of death. More than usual it seems and quite directly. My 33-year old cousin just passed away in February from an extremely aggressive cancer. A cancer that seemed like it could be managed with time, but this cancer spread like wildfire. It was almost like a hydra in that when one spot was taken care of, two more cancerous spots would appear. She bravely battled hard. She fought to stay on this earth for her husband, her kids, and her family, until the Lord inevitably brought her home.

She lived life to the fullest, even before she had cancer. She instilled the truth of Jesus in her kids daily. I know full well, the Lord greeted her in heaven saying “Well done, my good and faithful servant.”

My parallel with Peter Pan and death comes in here: I have always been scared of dying. I’m human, and that is my human thought.

But what if I wasn’t.

Of course, I enjoy being alive, God created me and gave me a purpose; however, I shouldn’t be afraid of death. One thing the boy who wouldn’t grow up got right was, “To die would be an awfully big adventure.”

Writing to the Philippians, Paul said, “For to me to live is Christ, and to die is gain. If I am to live in the flesh, that means fruitful labor for me. Yet which I shall choose I cannot tell. I am hard pressed between the two. My desire is to depart and be with Christ, for that is far better. But to remain in the flesh is more necessary on your account (Phil. 1:21-24).”

My initial thought from reading this passage is that it’s insane that Paul would rather die than be on the earth. Then he realizes, God created him to be a disciple and to reach the unbelievers. Paul presses on.

If there is anything I have learned from burying my beautiful, young cousin, it’s to live life to the fullest.

DON’T WASTE YOUR LIFE, ladies! Tell others about Jesus, tell your story, don’t take your breath for granted.

While we are here on earth reaching the lost in obedience to Christ, my prayer is that you won’t forget the biggest adventure is yet to come. Whether death takes us or we are raised to be with Him, it will be an awfully big adventure.